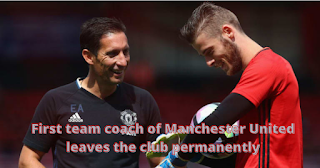 Manchester United is not having a good time in the Premier League at the moment. To make things worse, first-team goalkeeping coach Emilio Alvarez has decided to part ways with the club on a permanent basis.

Alvarez came as a youth player from Real Madrid and played professional football for many years during the 90s. He joined United as the first team goalkeeping coach in 2016 and has mentored David de Gea during his initial years. Under his able guidance, the Spaniard became arguably the World’s best and has served the team through thick and thin. The departure of Alvarez would surely be a blow to the Red Devils who are trying to get back to form in both domestic and European competitions.
Emilio happens to be the last coaching staff appointed by the previous Manchester United manager Jose Mourinho to leave the club. Earlier this year, the Old Trafford side brought in Richard Hartis as the club’s senior goalkeeping coach. It was revealed then that Alvarez would work alongside him for the season, but for reasons unknown, the 47-year-old has decided to trade his way out of Manchester.
Following the departure of the former goalkeeper, United boss Ole Gunnar Solskjaer said, “I would like to thank Emilio for all his help and hard work since my return to the club. We all wish him well for the future.”
The man himself was also thankful for his days at the club, “I will always be proud of belonging to this club. Wishing you every success in your endeavors.”
Manchester United’s season has been mediocre so far. They have gathered only eight points from six matches in the British top flight. In the next big match of the league, they will lock horns against Arsenal on Monday night. Meanwhile, in the Europa League, it was a scrappy 1-0 win over FC Astana that helped the side get off to a decent start to the European campaign. But, concerns are high as the team failed to impress in the Carabao Cup fixture against League One side Rochdale as well. It took Sergio Romero’s excellence in a penalty shootout to defeat the minnows after it was 1-1 in the regulation time.
It remains to see whether Solskjaer’s side can return to their old glory in near future.